Kraken Attack: All Together against the Kraken! 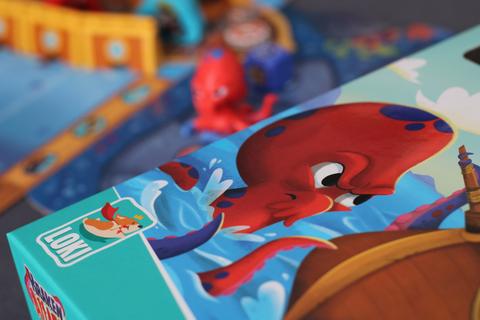 You and your group of mates have decided to sail the Seven Seas in your new pirate ship. The tide is calm and the weather is just right to set sail. The mainsail is band new and has black and white stripes. And then, there’s a small black flag with the pirate’s skull at the top of the mast, flapping in the wind. This pirate ship really cut a fine figure! Out of nowhere, the calm sea becomes agitated and the shape of Tootone, the terrible Kraken and his destructive tentacles burst from beneath the waves. Quick! All hands on deck! We must join forces to save the ship because if the Kraken manages to make four holes in the ship, it’s all over! It will sink and you will have lost the game. You will also have to go home swimming… However, if you manage to put three tokens on terrible Tootone’s tentacles, Hooray! You’ll have won and you will have made the Kraken return to the depths of the abyss!

How does it work?

It’s super easy! There are dice, Tentacles, Ship’s Rails, cards, Hole and Kraken Attack tokens, hallways to protect on the gameboard, 4 pirate pawns and one frightful Tootone! You will roll all of the available dice to move the tentacles and protect the ship’s rails with cards specific to each pirate. Each little pirate has special capacities unique to them to force Tootone to retreat: Cannon specialist like Billy or a great shot like Elena, Astrid is quick and resourceful and Samuel is more clever than the Kraken itself. Each and every one of them is in charge of protecting an area of the ship from the formidable tentacles. Beware of the funny faces drawn on the cards because they will make the Kraken come closer to the ship. And as the Kraken gets closer more dice will become available and the tentacles will move towards the ship’s rails even faster! You must force them to retreat or the formidable tentacles will poke holes in the pretty hull of your ship. There are 3 variants of the game, one for very young sailors and one for experienced sailors. And for solo sailing ? No problem, there’s also a solo variant!

Be stronger than the Kraken and sail whichever way the wind blows in your amazing ship, but be careful, Tootone is a clever octopus and you will have to join forces to defeat it!

Kraken Attack is a “Tower Defense” children’s game that you will all love! It is a cooperative game where children’s imagination will contribute to breath-taking role play and keeping the game novel everytime!